With globalised access to different retailers, without geographical restrictions, and the growing demands of consumers, competitiveness in this sector is increasing. To be able to focus on differentiating services and experiences, retailers need to ensure that their operations are optimised to deliver products with a high level of service at the lowest cost. This may entail working on the design of the supply chain, the operating model of the distribution centres and on the transport network in order to achieve maximum logistics efficiency.

One of the biggest international players in the food retail segment, with a strong focus on the quality of its products, development of its own brand and partnerships with local suppliers. The business covers a network of more than 3100 shops and 30 distribution centres, spread across three countries and employs around 118,000 people. It belongs to a group with 225 years of experience and achieved a sales volume of around £16bn in 2020.

Faced with the continuous growth in business volume along with the increase in services offered to consumers, the company felt the need to analyse the operations of its logistics distribution network. The aim of this analysis was to identify the weaknesses of the operation and design an operational model capable of moving the products more quickly, at a lower cost, and with a lower number of occurrences.

Aiming at the durability of the improvements to be implemented, implementing a culture of continuous improvement across the different operational areas was also vital.

A multidisciplinary project team was established involving members from the different areas of the operation: warehouses, transport, and supplies, with the common goal of maximising logistics efficiency in distribution.

The different operating modes in the distribution centre required different analyses and solutions on a case-by-case basis. The solution used for the different warehouse operations was to simplify the administrative process of receiving items, making the most of information systems combined with sample checking. Shift changes were also optimised, minimising their impact on the ongoing operation.

1.Logistics efficiency of the picking by store operation

For the operation component that works with items in stock and picking according to shop order, it was necessary to review the positioning of the items as well as the standard work of the picking operation itself.

The distribution of articles across the different locations has a significant impact on the distance travelled by the picking team, directly affecting the productivity of the operation. In addition, the picking sequence also affects the shop operation that will receive the products as they have to distribute them along the different aisles.

Thus, the warehouse was reorganised considering the volume and picking frequency of each item, its size (relevant for the palletisation sequence) and its position in the aisles. This has resulted in a layout that minimises distance travelled and facilitates pallet construction, maximising productivity, service level, and minimising damaged goods.

The order picking method was also changed to batch-picking which allows an employee to pick for two shops simultaneously, taking into account the similarity of the orders received. In this way, in a single visit to a stock position, two shops are supplied.

2.Logistics efficiency of the picking by line operation

In this operation, to minimise the distance covered during the picking process, the layout was reorganised, changing the position of the shops to be supplied, taking into account the delivery time and the volumes and profiles of orders.

Adjusting the suppliers' delivery schedule had a significant impact on the operation as it eliminated the need for excessive buffer zones, minimised multiple pallet handling and optimised the occupancy of the picking teams.

An algorithm for team sizing was also designed which allowed the workload to be levelled out, anticipated demand peaks and eliminated the night shift from the picking operation.

With visual management and continuous training of employees regarding the ideal pallet construction, it was possible to increase its final height, minimising the number of pallets to be handled. 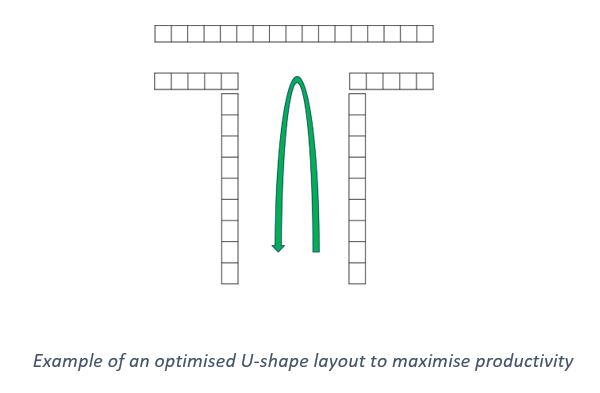 The optimisation of transport routes and fleet is dependent on the correct planning. To do this, it is necessary to have a reliable forecast of the number of pallets to be transported at each moment, for each shop.

Changing part of the vehicle fleet to a container pool system (the truck’s container is separated and loaded which allows the driver to distribute a different container using the truck and then return to collect the original container which has now been loaded) allowed minimising the impact of set-up/loading time on the distribution route as this can now be done outside of the opening time of the routes. So, when the route starts it already has the pool ready to distribute.

Success in following the delivery route also depends on the in-store unloading operation, which was often responsible for delays along the route, due to the teams' lack of preparation when the truck arrived. For this reason, an automatic alert system has been set up to ensure that the shop is ready to receive the goods the moment they arrive.

In order to guarantee the continuous improvement of operations and employee performance, team dynamics were set up, supported by operation indicators that help the teams plan, train and problem solve. The role of the team leaders was also standardised, and they now have a defined process for monitoring the operation to improve results.

The layout changes, operations standardisation, team training and improvement dynamics contributed to a 20% increase in productivity (measured in boxes per hour) with no increase in the number of occurrences.

The change in the transport network has reduced operating costs by 10%. The solutions implemented can be replicated in the different distribution centres obtaining the same results.

Find out more about transformation in this sector